A Quick Overview On the Simulation Controls

This page describes the basic driving controls and interfaces. When you are driving a train, the interface you are presented with looks somewhat like this: 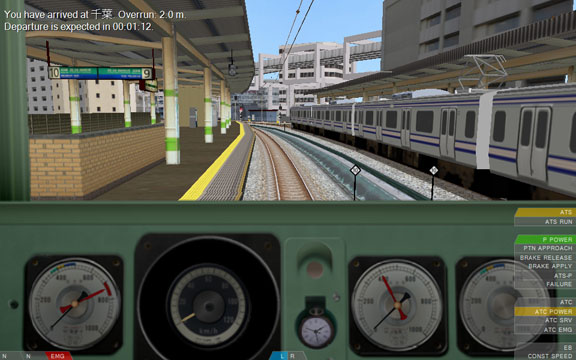 In the following article, the invidual elements of the interface are explained and you are given instructions on how to operate the train.

Please note: Controls are given with their name and their default keyboard configuration, e.g. POWER_INCRASE (Z). If you remap the keyboard controls or assign controls to joysticks, work with the names to identify the underlying control.

Additionally, it should be noted that many trains use plugins that provide their own driving mechanisms and security systems. This page mainly depicts the built-in systems. You should, in any case, consult the operational manual of the train (if available) for more specific details.

The most basic controls in the train include the reverser, the power lever, the brake lever and the emergency brakes.

To change the direction of travel, operate the reverser. There are three states of the reverser: B (Backwards), N (Neutral) and F (Forwards)

Normally, when you start the simulation, you will have to move the reverser into the forward position.

The power lever controls how much power is applied to the engines. If the power is cut off, the power indicator will display N. If a power notch is selected, the indicator will display anything like P1, P2, P3, and so on. The amount of power notches available depends on the train. Generally, a higher power notch corresponds to higher acceleration. Be aware though that applying too much power can result in wheel-slip, which prevents the train from accelerating altogether.

The brake lever controls how much power is applied to the electric brakes, or how much pressure is applied to the physical brakes. If the brakes are cut off, the indicator will display N. If a brake notch is selected, the indicator will display anything like B1, B2, B3, and so on. The amount of brake notches depends on the train. Higher brake notches correspond to higher deceleration. Be aware though that applying too much brake can result in wheel-lock, which prevents the train from decelerating altogether.

Some trains are also equipped with a hold brake. The hold brake appears between the N and B1 notch and allows the train to hold the speed when driving on a downward slope, meaning it automatically applies the brakes to prevent the train from accelerating. The hold brake does not apply power on an upward slope, though.

Some trains employ an automatic air brake which does not have brake notches but a brake valve that is operated manually. These trains always have separate power/brake handles. The states of this brake valve include REL (release), LAP (lap) and SRV (service). 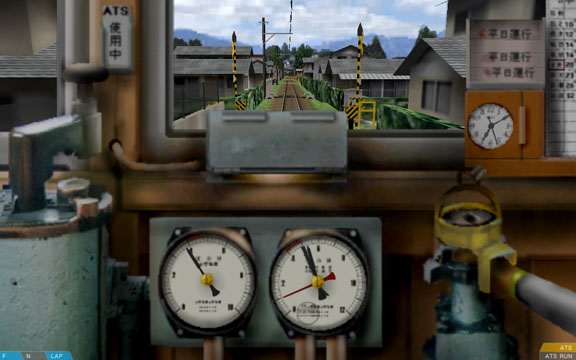 Please note that with an automatic air brake, the brake valve does not control the brake cylinders directly, and as such, there are noticable delays from changing the valve position to the desired effect.

The emergency brakes, once applied, usually apply a higher level of deceleration than the service brakes.

In order to release the emergency brakes, press the key that corresponds to decreasing the brake notch, e.g. BRAKE_DECREASE (,), SINGLE_NEUTRAL (A) or SINGLE_POWER (Z), depending on the train.

2. The EB and CONST SPEED systems

Trains that are equipped with an EB or a CONST SPEED system include a respective indicator in the bottom-right corner of the screen.

The EB system is a form of a vigilance device that keeps track of the reverser, power and brake levers. If present in a train and the controls remain unchanged for 60 seconds, an alarm will sound and the EB indicator lights up in orange. You now have 5 seconds to acknowledge the alarm by pressing the SECURITY_A2 (delete) key. Otherwise, an emergency brake application will be performed by ATS-SN. See the section about ATS-SN for further information about what to do.

On some trains, you can manually operate the doors, while on others, the doors are automatic. The state of the doors is depicted by indicators at the bottom-middle of the screen if at least one door is not fully closed.

If the doors close automatically, the indicator displays blue, otherwise it will display green, and you will have to close them manually.

If manual operation is possible, open or close the doors by pressing DOORS_LEFT (F5) for the left doors, or DOORS_RIGHT (F6) for the right doors.