A basic British color-light signal may contain up to four signal aspects. These aspects include:

Alternatively, you may encounter semaphore signals. These come in two basic variants:

A ‘Home’ signal has a red arm, with a white band approximately 2/3 of the way towards the end.

A ‘Distant’ signal has a yellow arm, with a triangular cutout, and a black band approximately 2/3 of the way towards the end.

These signals provide an advanced warning of the position of the next home signal.

There are two basic variants of route speed limit signs, as shown in these images.

Both of these sets of signs update the route speed, expressed as a value in mph.

AWS (Automatic Warning System) is a British safety system intended to prevent the train from passing a red signal by applying the emergency brake if the driver does not acknowledge alarms in time. 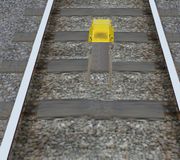 About 180 meters from a signal, an AWS magnet is placed ( Note: On sections of the West Coast Main Line with a permissiable speed of above 100mph this distance is increased to 230m ). If the signal is red, the ‘AWS Horn’ sounds continously in the cab, and the ‘AWS Sunflower’ instrument will show. If the signal is clear, the ‘AWS Bell’ sounds once, and the ‘AWS Sunflower will remain dark.

An AWS magnet may also be placed in advance of the commencement of either a permenant or temporary speed restriction.

These magnets will always generate an AWS Warning, and are intended to remind the driver that they are approaching the speed restriction, and must consider braking appropriately. They should be acknowledged using the procedure described above.

TPWS (Train Protection and Warning System) is a British safety system intended to prevent the over-running of red signals.

TPWS is always used in conjunction with AWS. 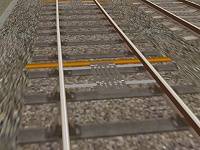 The inductors are only energised when the signal shows a red aspect. When the train approaches a red signal, and the on-train TPWS receiver passes the ‘Arming Loop’, the on-train equipment is activated, and it measures the time taken to reach the ‘Trigger Loop’. If the ‘Trigger Loop’ is reached too quickly, then the TPWS knows the train is travelling too fast, and the system will automatically make an ‘OSS Brake Demand’, bringing the train to a halt. The distance between the OSS inductors varies, and the distance determines the maximum speed at which the on-train equipment makes an OSS brake demand.

The ‘Trainstop Sensor’ (TSS) is also energised only when a red aspect is showing. It works in a similar way to the OSS, but regardless of speed, a train passing energised TSS inductors will cause the on-train TPWS equipment to make a ‘TSS Brake Demand’, bringing the train to a halt.

The TPWS equipment visible in the cab consists of a control panel with illuminated buttons and/or indicator lights:

Under normal circumstances, you should never see any TPWS indicators illuminated, apart from during the startup/self-test procedure.