A basic Japanese signal may contain up to six signal aspects. These aspects include:

The exact signal limits will depend on the particular route used.

Note: Route speed limits must be follwed independantly to the signal speed limits, with the lower value taking precedence.

This sign updates the route speed, expressed as a value in km/h.

This updates the route speed limit to unlimited speed.

This is a station stop point.

ATS-SN (Automatic Train Stop - SN) is a Japanese safety system intended to prevent the train from passing a red signal by applying the emergency brake if the driver does not acknowledge alarms in time.

About 600 meters from a signal, an S-type transponder (white box) is placed that raises an alarm in the cab if the associated signal is red.

About 20 meters from a signal, an SN-type transponder (green box) is sometimes placed.

Once an emergency brake application is performed, you have to reset the safety system. Do so by cutting power, applying the emergency brakes, setting the reverser to neutral, then pressing the SECURITY_B1 (Home) key.

Trains equipped with ATS-SN include these indicators in the bottom-right corner of the screen:

ATS-P (Automatic Train stop - Pattern) is a Japanese safety system intended to prevent a train from passing a red signal by continuously calculating a brake curve and ensuring that the train does not exceed the calculated speed limit.

On several locations in front of a signal, pattern renewal transponders (white boxes) are placed. The farthest one is usually about 600 meters away from the signal.

About 25 to 30 meters in front of a signal, an immediate stop transponder (yellow box) is usually placed.

Trains equipped with ATS-P include these indicators in the bottom-right corner of the screen:

The system receives the location of the preceding train and can automatically determine the appropriate speed limit that needs to be followed.

The OpenBVE implementation is a simplified and joined version of the great variety of ATC systems that exist in the real world.

The track must be equipped with ATC before it can be used.

Some trains can automatically switch between ATS and ATC at stations. On others, you will need to do this manually. 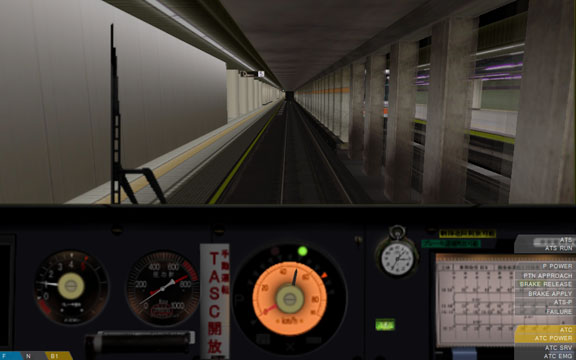 In a typical Japanese cab such as this, the in-cab signalling elements are placed around the speedometer and indicate the speed which you are currently allowed to maintain.

In km/h, the speed limits which ATC can apply are as follows:

Trains equipped with ATC include these indicators in the bottom-right corner of the screen: